DON REDFIELD and the Sagedusters
Mar 56 (BMI clearance on 24th March 56)
45-545-A - I Can't Go Back
(Redfield)    (Starrite BMI)
45-545-B - Montana Waltz
(Redfield)    (Starrite BMI)
SAGE RECORDS 545
(No label location, possibly Billings or Great Falls, Montana.)
Thanks to Al Turner who not only managed to find the record, but he also found a snippet on the artist in a Country Music Round-Up magazine. I’ll quote it here in full. “Young Don Redfield’s background is about as unusual as the come for folks in the country music field. For Don is a native of Boston, MA and began his musical career by studying classical violin for four years. All this changed however when he moved out to Montana in 1945. There, he traded two rabbits and six phonograph records for his first guitar, and has stuck with that instrument ever since. In high school Don organized his first dance orchestra known as the Tune Timers. While attending Rocky Mountain College, he rounded up a vocal trio known as the “Three Bears,” which appeared on a series of radio programs in Billings. This group was so well received that in no time at all they become greatly in demand for personal appearances throughout the Billings area. In the winter of 1952, Don carried two half-hour broadcasts from the Amvets in Billings and had two fifteen minute shows a week on KOOK. At present (sadly - no date on this snippet - MC), he’s keeping quite busy by participating in an occasional stage show, playing over KMON in Great falls and teaching guitar.”
All that besides, “Montana Waltz” is exactly as it says on the label - a waltz. He’s got a pleasant voice but the recordings are slightly muddy, which is a shame really. “I Can’t Go Back” is taken at a fast clip with fine instrumental support from fiddle, steel guitar and lead guitar. The sound is more muffled here than the slow B side; not so much that it spoils the disc but enough to detract from what is a fairly decent record, especially the nice Chet Atkins / Ronnie Durbin guitar solo.

I would think it is unlikely this label is part of Sage Records from Hollywood, CA. (MC / Al Turner / Country Music Round Up) 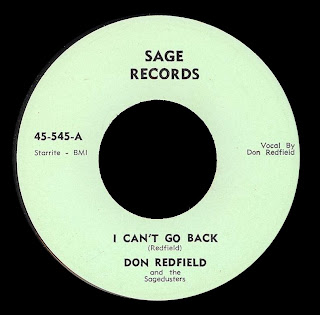 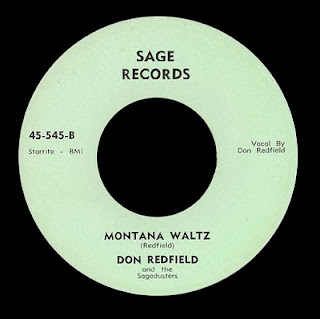 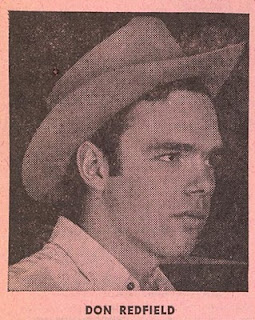 Posted by Malcolm Chapman at 16:21 No comments: