The only info I could find was in one of my old note books, dated 1994. The info reads "Apparently this is a pretty good disc". Now I've heard it, I wasn't too far off. Nice male/female hillbilly disc. It was listed on a set sale list from the US. (MC/Mark Lee Allen) 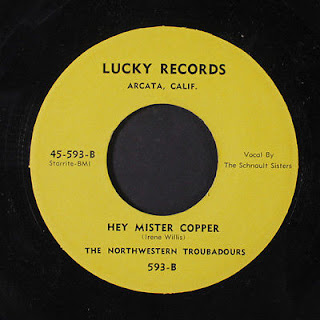 Email me!
Posted by Malcolm Chapman at 17:38 No comments:


The A side is a nice typical Texas honky-tonk / hillbilly song. Flip side is a thunderous rocker with heavy double bass and biting guitar. One of the best examples of the Starday rockabilly sound. The ending of the song is one of the most chaotic pieces of music every pressed into shellac as the musicians don't seem to know where to end. So they all seem to try to end at once with little success. (Sadly, nobody seems to have signalled to the bass player they're stopping!). This makes the side even better for it in my opinion.
Both Roland and his brother (Autry) were veterans of the Port Arthur, TX scene. (Port Acres is slightly west of Port Arthur). Kirby London recorded one of Roland's songs on D 1174.cRoland also recorded "Send Me Someone" / "I'd Own The World" on DIAMOND RECORDS 1003/4 as by Roland and his Rythm Boys (sic)


Posted by Malcolm Chapman at 17:37 No comments:

Born in Arkansas, Gene was a truck driver by day and a singer and DJ by night. In 1953, he was DJ'ing over KRSC in Seattle, WA and appearing on Seattle's "Junior Ranch Show". He was signed to Vogue Records in 1953 and had at least one release (Vogue #1022 - "So Do I" / ???). Billboard thought it routine, but then they weren't always right.
By 1956, Billboard finds him recording the disc above. Again, they are not glowing in their praise. This was either reissued or re-recorded on the Miracle Label (Seattle, WA) sometime in the 70’s As an aside, notice neither side is published by Starrite or one of it’s affiliates. Doesn’t happen often.

There was a variety of issues on MECCA Records from Seattle, WA, though I think this may have been the only record pressed by Starday. 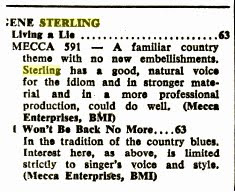 Posted by Malcolm Chapman at 09:33 No comments:


Label states "A Product Of Sprawls Enterprises". Label was owned by Joel Ray Sprawls.
Curley Ray Sanders was born in 1935 in St John, KY. he was a DJ on WCTO (Campbellsville, KY) in 1956, and on WBRT (Bardstown, KY) in 1958. WBRT is where he recorded with Joe Brown on San Records, possibly paid for by Curley. He was a regular on the Renfro Valley Barn Dance (KY) in 1958.
I may not know much about Curley but I found quite a few records by him. He  shows up on my radar in about 1949/50 on Star Talent from Dallas, TX (#749 - Last on your list / Penny for your thoughts). There was a Curley Sanders (assuming it's him) appearing on the Saturday Night Shindig over WFAA (Dallas) in the early 50's. Then I find two discs on Imperial (#8197 - Love 'em country style / My heart is yours alone - Mid 53), (#8226 - Too much lovin' / I'm reaching for Heaven - Dec 53/Jan 54).
By 1956, Curley's obviously incorporated some "Cat Music" in his repertoire and he's found here hollering for all he's worth (well, not quite hollering, but there's an urgency in his vocals). The A side I've yet to hear. Neil Scott picked one up and then sold it on (dumb arse), so I never managed to hear the A side. Flip is a stop/start rocker with cool lyrics and some fine accomp. by his band (who I presume are the Santones.) I think there's an under recorded mandolin or something playing through the solos but the guitar is drowning it out. Anyhow, it's a fabulous track. Almost awesome!
Curley springs up on the Concept label twice after the issue here and records another disc on Jamboree (which isn't pressed by Starday). (Concept #897 - Dynamite / You're smiling (I'm crying) 1957 - Elizabethtown, KY), (Concept #898 - Walking blues / This time - 57/8), (Jamboree 1833 - Heartsick and blue / I'll obey my heart - 57/58 - still located in Buffalo, KY and featuring the Kentucky Rangers). After that ......I'll have to wait until somebody else tells me :-)
(MC / Dan DeClark / Terry Gordon / Neil Scott)

Posted by Malcolm Chapman at 09:06 No comments: