BEAMON FORSE
Feb 55 (BMI clearance 25th Feb 55)
514-A - Rest Of My Life
(Forse)   (Starrite BMI)
514-B - You Better Go Now
(Forse)   (Starrite BMI)
RODNEY RECORDS 514
Bronson, TX
As far as I’m concerned, not only is this the first real true rockabilly disc in the series, but if there was ever a top ten Starday Custom listing, this would definitely be included! Great rockabilly guitar led, slap bass bopper featuring Beamon on vcls, his brother Ted on lead guitar, JT “Tiny” Smith on bass, Charlie Craddock on steel guitar and and unknown piano player. Born Beamon Tom Forse on 4th December 1934 in San Augustine, TX, he had a radio show with his brother Ted at KTXJ (Jaspar, TX) and he knew George Jones since he was a child.This disc was cut at Gold Star Studios, Houston TX., and it was inspired by hearing Elvis Presley’s “That’s All Right Mama” being played over the radio. The disc was financed by Rodney Spaford (hence the label name I guess) who was a rich guy from Sabine, TX. Beamon moved to California after this release, and he recorded as Tom Forse on Rich-Vein Records (owned by Terry Fell and features Eddie Cochran on guitar). Beamon also booked top acts on the west coast and wrote songs for Terry Fell, who would pay him cash for them. Beamon died in 2004, leaving behind seven children (and a few grandchildren I imagine). Beamon and Truitt Forse were cousins. (See Starday 596 when I get to publishing it). Supposedly issued on both 45 and 78rpm formats. Anybody got a photo of this guy? (MC / John Burton / Phil Tricker / Pascal Perrault / Neil Scott).

My name is Daniel Forse the youngest son of Tom Forse. I read the article you wrote about my father and would be happy to help you in any way I can. My brothers and I grew hearing all the great stories about him playing music with Elvis, George Jones, Willie Nelson ect.. and all the wonderful songs he wrote for some of the biggest country western stars. My father was the most talented man in music I've ever known and to hear George Jones say it made it true. Please contact me and we can go from there. Great article and thank you for remembering my father.

Sadly, after replying, I never heard anything back from Daniel. Darn shame. 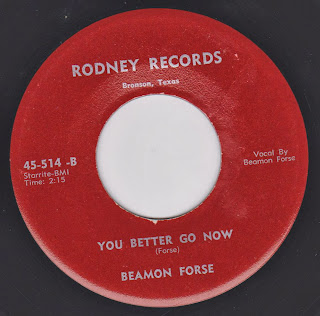 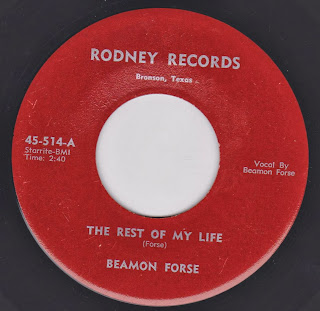 Posted by Malcolm Chapman at 14:33 No comments:

BUDDY LIVINGSTON and his All Girl Band
Feb 55 (BMI clearance on 4th May 55)
513-A - Back When She Was Young
(Livingston)   (Starrite BMI)
513-B - I Can't Love No One (Like I Love You)
(Livingston)   (Starrite BMI)
SAVANNAH RECORDS 513
510 West 37th Street, Savannah, GA
513-A is a different version to the earlier release on SAVANNAH 505. In fact, it's more slicker than the original and the steel guitar break has been practiced and honed to perfection. The sound quality of Savannah 513 recording is a lot clearer on this disc than the previous release. According to the blurb on a DJ copy of one of his King releases, (1181) Buddy was born in Fitzgerald, GA and was 19 years of age when this disc was released. By March 1957, Buddy was appearing on WTOL-TV, Savannah, GA daily between 1:30 and 2pm, Monday to Friday and a 7:00 to 7:30 slot every Friday evening. Buddy died in 1992. (MC / Al Turner) 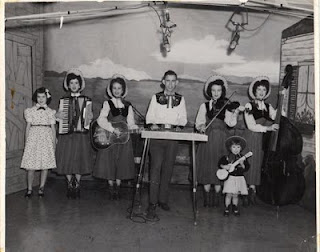 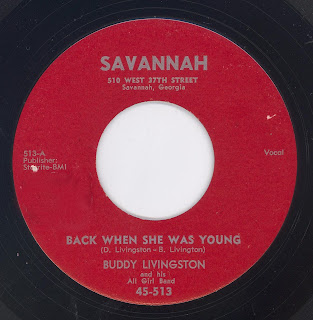 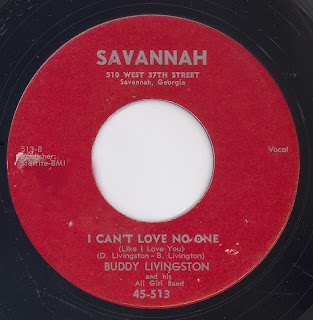 Posted by Malcolm Chapman at 14:03 No comments:

JOE BRYANT and the Mississippi Woodchoppers
Jan 55 (BMI clearance on 11th Feb 55)
512-A - Pulpwood Blues
(Bryant)   (Starrite BMI)
512-B - A Man Ain't Nothin' But A Woman's Slave
(Bryant)   (Starrite BMI)
MISSISSIPPI RECORDS 512
Po Box 9633, Centreville, MS
A nice, tough Hank Williams type disc, once again bordering on Rock-A-Billy, with rough-hewn vocals and a competent band featuring steel guitar, fiddle and guitar. A side has a “Lovesick Blues” feel to the intro. Flip side is more of the same. Again, like the previous disc, there only seems to be few known copies and possibly only ever pressed as a 78rpm. I think the steel guitarist gets a little lost in the solo on the B side, but that only adds to the character of the track in my opinion. (MC). 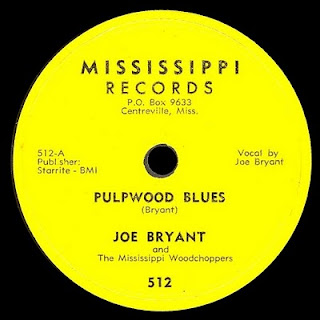 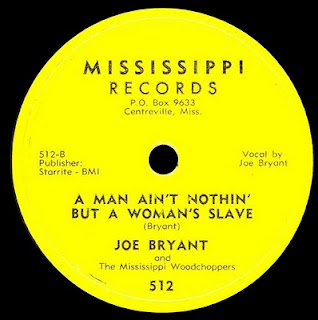 JERRY and the String Trio

Although both sides of the record credit vocals to Jerry and Steve, only 511-A is a duet. It’s a wonderful disc that has been described as an early example of “Gospelbilly”, although I think only the gospel part is correct. Nevertheless, you could say that the music certainly has rockabilly overtones., especially the “B” side. No writers credits and although Starrite published both sides, that info seems to have been left off of the label. As far as I know, there’s only two known copies of this disc. As yet, it has not surfaced as a 45 and probably only exists in it’s 78 format. (MC / Phil Tricker/Al Turner/Dave Sax).

According to Pete Sturman, The artist could be Jerry Barlow, who released records on OT, Lyric, Khoury's and Pa-Nee (possibly others). Here is his email:-
"I talked with Cledis Mott in Lake Charles last night and asked if he had ever heard of Jerry & The String Trio. Right away he told me it must be Jerry Barlow. Jerry had 3 or 4 records on Khoury's all C&W. I have no way of proving it. Cledis told me Jerry might have had polio, he had some type of disability, which Cledis thought might have been polio. At the time polio was the biggest scare in the US.

This is the reply i got from Lyle Ferbrache, still not much to go by, but Cleadis is very knowledgeable of musician in the Lake Charles area.
Lyle was going to e-mail other people he knows so may get more info."

My Reply
"As you mention, a Lake Charles Artist. As the writers credits are missing on the Johnson Record 78, and the “Jerry” lacks a surname, the link between the two is still credible. Since he didn’t seem to record Gospel before (or after – as far as I’m aware), perhaps he dropped his surname for the record.

So yeah, maybe it’s the same guy. But I don’t think they sound very similar. Sure, by 1955 maybe his voice dropped a little in range. But they sing and pronounce things differently - (maybe intentionally?). Plus, can’t believe Jerry Barlow was the only singer in Lake Charles called Jerry. I compared the Starday Custom with the Khoury Release.

So I don’t know. I wouldn’t have linked them before but glad you mentioned it. Happy to add the above in the update section of the next box set, but I’m not entirely convinced. Feel free to add anything you feel is relevant.

The guy who MIGHT know is John Broven who wrote an excellent book on Louisiana music. Don’t have an email for him but he must be contactable somehow." 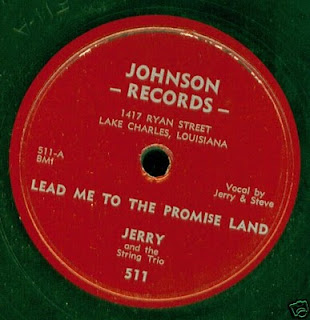 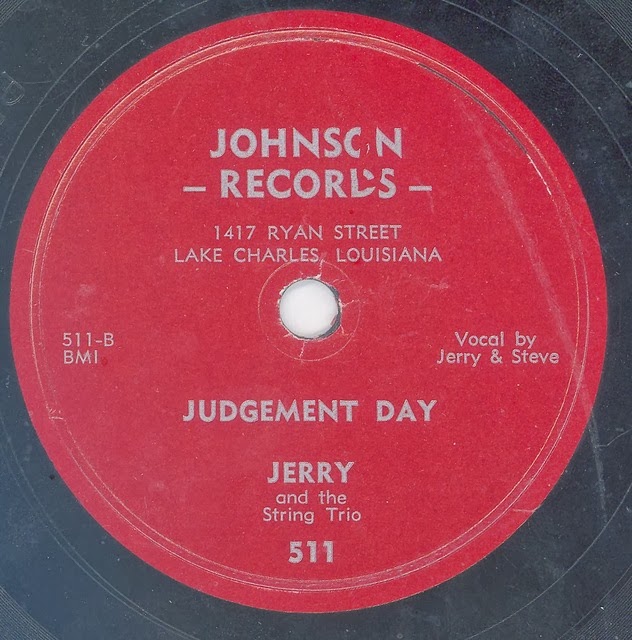 RAY MAYO
Jan 55 (BMI clearance on 28th Jan 1955)
510-A - Mended Heart
(Mayo / Simon)   (BMI)
510-B - Who Winds Your Clock
(B Hughes / B Bates)   (BMI)
S-KAY RECORDS 510
17024 South Western Ave, Gardena, CA
Both sides are uptempo hillbilly (again) with piano and fiddle. Ray seems to have a little trouble with both timing (to me, he sounds slightly ahead of the band in places but he catches up after the solo) and rhyming but both sides are pleasant enough. B side has a very slight “double-entendre” nature about it; probably a little racy for the staid ol’ fifties but milder than watered down mustard by today’s standards. Regardless, the "Not Recommended For Radio Broadcast" stamp can be found just above the title. “Who Winds Your Clock” was previously recorded by Bucky Bates on 4-Star 1295 in 1949, and rereleased later on 4-Star 1559 in 1951. Just as the last release, the publishing info is left to plain old BMI instead of the usual "Starrite". And for the first time so far, I'd like to present label shots NOT owned by Phil Tricker. It's a good job they're friends otherwise Phil would be sending a hit man to Al's door.(MC / Al Turner). 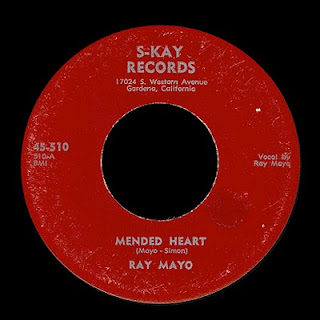 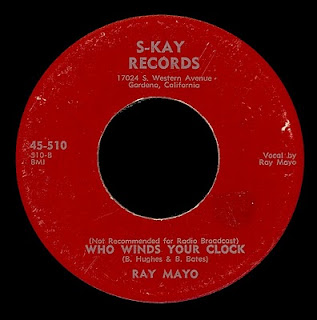 Posted by Malcolm Chapman at 03:18 No comments:

JERRY HOPKINS and the Southern Playboys
Dec 54 (BMI clearance on 21st Jan 1955)
509-A - Cuddle Up To Me   (BMI)
(Hopkins)
509-B - My Everlasting Love   (BMI)
(Moore / Hopkins)
DART RECORDS 509
1315 Montgomery St, St Louis, MO
Once again, no info on the artist. (There's a pattern emerging here ......) The DART version of “My Everlasting Love” is different to the version released on STARDAY 182 (“Mamma Baby” / “My Everlasting Love”), and I'm guessing this was the first release since the Starday disc was reviewed by Billboard on 18th June, 1955. The A side on the Dart disc is the uptempo tune with fiddle, guitar and steel guitar. B side’s pleasant enough weeper. DART 509 was issued on both 45 and 78rpm formats. Note the lack of publishing details - a rarity for a Starday Custom.(MC / Al Turner). 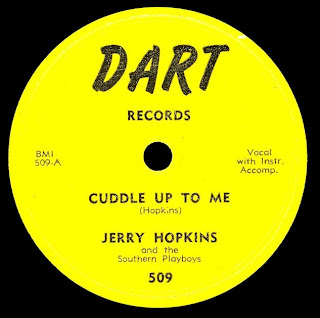 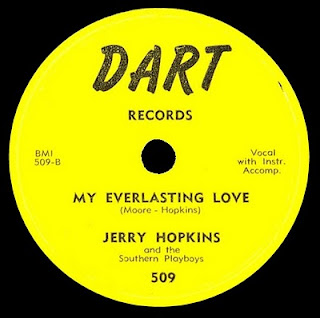 Posted by Malcolm Chapman at 02:58 No comments:

EARLY GRAHAM and his Musical Drifters
Nov 54 (BMI Clearance on 18th Dec 1954)
508-A - I Wish You'd Start Fooling Again   (Starrite BMI)
(Graham)
508-B - Stop Fooling My Heart   (Starrite BMI)
(Graham)
TEXAS RECORDS 508
Rt 6 - Box 374-D, Henderson, TX
Another fine hillbilly disc with Grahams' lazy, perhaps slightly flat vocals supported by a tight little combo featuring guitar and steel. The B side is a good mid tempo hillbilly song. Andrew Brown states "Early L. Graham was born August 24, 1909 in Arkansas, but resided in Rusk County, Texas most of his life. He died October 4, 1978, aged 69 years old. So he was about 45 when he made this, his only known record."(MC / Andrew Brown). 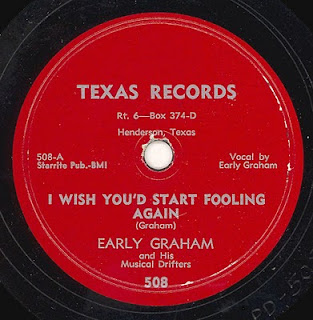 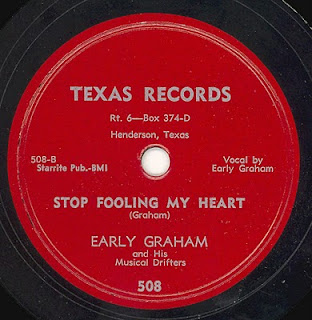 Posted by Malcolm Chapman at 02:52 No comments:

AL WARWICK
Sept 54 (BMI clearance of 20th Aug 1954)
507-A - Rag Doll   (Starrite BMI)
(Warwick)
507-B - You Are The Only One   (Starrite BMI)
(Warwick)
CALIFORNIA RECORDS 507
8313 Sparton, Van Nuys, CA
Real Name: Arthur Alton Warwick. Al paid for the studio time and the musicians to cut these self-penned songs and put them on record for posterity. Well, for the few of us left who care about such things anyhow. The band on both sides romp along nicely behind Al’s relaxed vocals. He struggles a little with timing here and there but overall it's a pleasant disc. No other info on the artist at this time, but the guitarist on both sides sounds very, very much like Roy Lanham.(MC). 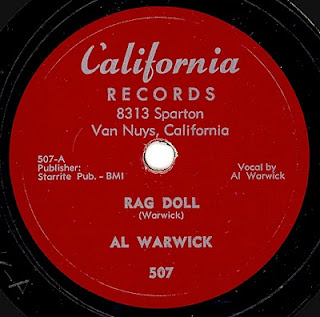 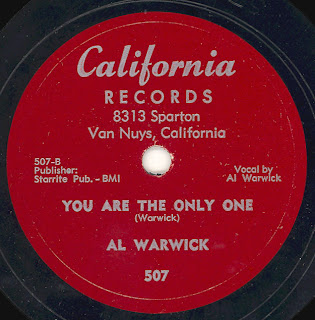 Posted by Malcolm Chapman at 01:59 No comments: