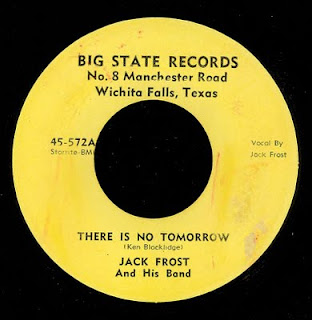 BIG STATE RECORDS 572
No. 8 Manchester Road, Wichita Falls, KS
JACK FROST and his Band
Jul 56 (BMI clearance on 3rd Aug 56)
45-572-A - There Is No Tomorrow
(Ken Blackridge) (Starrite BMI)
45-572-B - Crying My Heart Out
(Ken Blackridge) (Starrite BMI)
No knowledge about Jack Frost and his Band. Both sides are western swing, like an early Texas Playboys with trumpet, guitar, fiddle - the whole nine yards of western swing sophistication. The B side is the better of the two in my opinion but they are kind of similar so it's hard to chose on from the other.
Email me!
Label Shots courtesy of Al Turner. 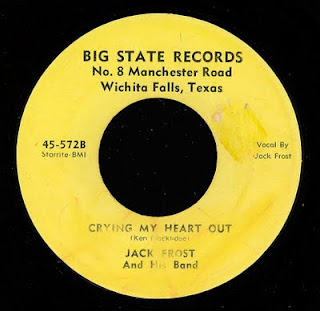 Posted by Malcolm Chapman at 23:59 No comments: 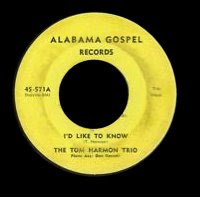 Pleasant Gospel Music, spoilt perhaps by the "recorded at home" sound quality of the disc. Who ever the female vocalist is, her voice cuts through everybody else's efforts. Around the time of this recording they were performing around Anniston, AL and later appeared on the "All Nite Gospel Singing" Show held at the City Auditorium. Apart from that …. nothing else so far! (MC)
Email me! 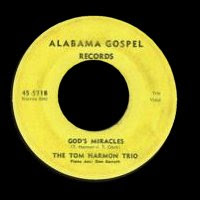 Posted by Malcolm Chapman at 18:05 No comments: 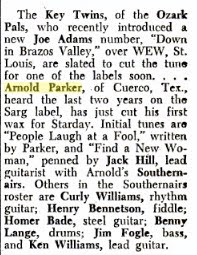 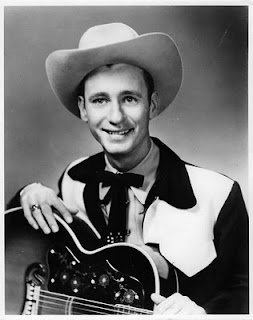 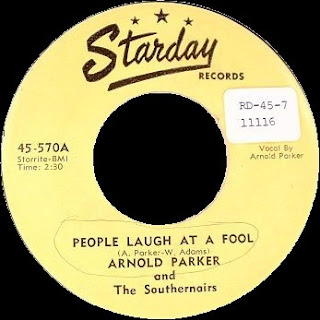 STARDAY RECORDS 570
Cuerco, TX
ARNOLD PARKER and the Southernairs
Jun 56 (BB review on 4th Aug 56 & 17 Nov 56)
45-570-A - People Laugh At A Fool
(A Parker - W Adams) (Starrite BMI)
45-570-B - Find A New Woman
(W Adams - J Hill) (Starrite BMI)
Arnold was born on January 25th 1936 in Cuerco, TX and has been singing since standing up in his local church and belting out a song as a small child. Once Arnold graduated from high school, he became the featured vocalist for a popular dance band called The Southernaires, playing mainly around the south Texas area.
With regards to the record above, I'm gonna let Arnold do the talking - well - writing - which he sent to me by email a few days ago:
"The musicians on the record were the exact 8 piece band that we had in the 1950s. The intro and the second guitar lead is Ken Williams. The first guitar lead is Jack Hill who actually wrote "Find a New Woman". We recorded this at ACA Studios in Houston, Texas in 1956. Walter Adams was my so called manager at the time and he set up the recording and handled everything. I don't remember the exact amount but I know we got quite a few copies to begin with and then went back and got more later. Radio stations in Texas and some in Louisiana played the song and we did perform it live quite a bit on our dance jobs. I also made some trips around to a number of radio stations plugging the record. There were a couple of local stations that conducted a weekly hit parade and the record showed up in the top 10 on those."
I've never heard the A side. But the flip is one of the best, killer Rock-A-Billy records ever pressed on Starday - some achievement when you think they also issued Sonny Fisher, Truitt Forse, Bob Doss and many, many others. When I first heard this disc I was absolutely speechless! (I forgot to play the flip as I was still in shock). Parts of the solo has an almost western-swing - twin guitar feel to it but it's the biting intro and end part of the solo that gets my heart a-pounding. Arnold's got one of those voices which can make a plain country record great and effortlessly slip into RaB without almost no effort at all! (His Sarg recordings are also darn good, although not as great as this disc - but that's just my musical bias coming to the fore.) Plus, his email clears up whether it was Hal Harris on guitar. It sure sounded like him, but obviously it isn't. Billboard described this disc as follows: (17 Nov 56) "A side - Wistful warbling on an appealing weeper" B side - " Parker sells a bouncy rock and roller with verve and good beat" Understatement of the year! In Dec of that year, it also mentions that he had joined the deejay staff at KULP, El Campo, TX. Again, in BB, on the 4th August, it mentions the members of the Southernaires. (see BB advert).
About the same time as the recording, Arnold and the band made their first appearance on the Louisiana Hayride. (He also met Elvis Presley here and discussed Arnolds home-made shirt his mother had made for him.) In Feb 57, he met the love of his life - Jeanette Catherine Wendt in El Campo, TX and 3 months later he left the band and got married. The early 60's finds him in Victoria, TX and he was fronting a band called The Mustangs and recording for Charlie Fitch's Sarg Records. (He had recorded with the Sarg label before this disc too.) He continued playing until 1973 when he decided to spend more time with his family. But, as the music bug seems to linger in all true musicians, even today he steps up on stage and belts out a country tune and the odd RaB number for the crowd. Perhaps I need to get myself to Texas :-) Arnold also recorded for Wildcat Records.
It was a thrill to hear from Arnold. It's not often you can tell someone how great their record is 50 years on. Arnold has his own web site which the link can be found below. He was also inducted into the Rockabilly Hall of Fame in 1999.
www.arnoldparker.com or www.rockabillyhall.com/ArnoldParker
Lord, I feel privileged. (MC / A Parker / Neil Scott / Nate Gibson)
Label Shots courtesy of Terry Gordon. 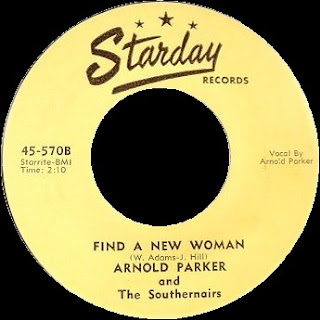 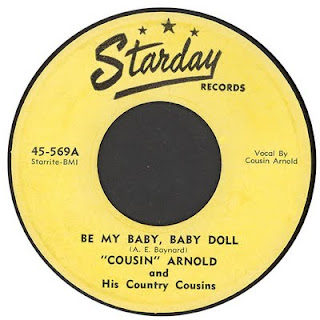 STARDAY RECORDS 569
(Artist located in Rock Hill, SC at time of release.)
COUSIN ARNOLD and his Country Cousins
Jun 56 (BMI clearance on 20th Jul 56)
45-569-A - Be My Baby, Baby Doll
(A E Baynard) (Starrite BMI)
45-569-B - What is Life To You
(A E Baynard - Glenn Martin) (Starrite BMI)
Billboard reveals that Cousin Arnold is one Arnold E Baynard who was the commercial manager of WTYC, Rock Hills, SC (Summer 56). BB mentions that Arnold and his band are " ... new to the South Carolina area and are doing a weekly half-hour sponsored show over WTYC. They were also doing a weekly bard dance at a lodge in Rock Hill. (I have no idea where they were before this, dated 13 Aug 55. I should also mention that the snippet of info was fed to Billboard by Baynard, who seems to have neglected to mention at the time that he was in fact the artist in question.) By Nov 55 he was also doing "Day Break In Dixie" which was a 6:00 - 6:30 am segment in addition to his 1:00 - 2:00 over the same radio station. It also mentions he has penned two songs "Be My Love" & "If I Were A Millionaire" which he 's trying to get recorded. Did he ever record these? Anyhow, by the summer of 56, he'd recorded the two tracks above and had them shipped to Starday for a pressing run of 300 copies.
The A side is a jolly old hillbilly song with a banjo as the main instrumental. It's a bit of a "sermon" rather than an actual song, but pleasant enough I guess. Flip side is a torrid Country / Rock-A-Billy cross over which flies along at a fast pace. Good guitar and steel throughout with that rather annoying banjo threatening to take over at the slightest provocation. (Sorry, I'm not a huge banjo fan.) Marvelous stuff indeed! (MC)
Email me!
Label Shots courtesy of Terry Gordon. 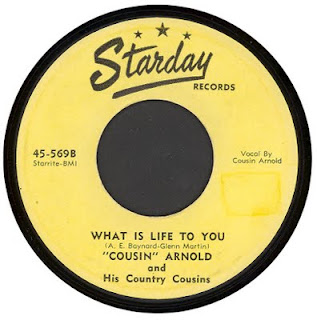 Posted by Malcolm Chapman at 17:53 No comments: