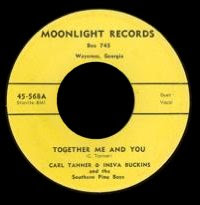 MOONLIGHT RECORDS
Box 745, Waycross, GA
CARL TANNER and IVENA BUCKINS and the Southern Pine Boys
Jun 56 (BMI clearance on 20th July 56)
45-568-A - Together You And Me
(Tanner) (Starrite BMI)
45-568-B - We're In Love
(Tanner / Buckins) (Starrite BMI)
A second offering from Carl, this time supported by one Ivena Buckins. A side is a slow hillbilly disc with sawing fiddles and Carl & Ivena take turns in singing portions of the song. Ivena's voice is a little flat here and there - (in fact, Carl struggles a little too - almost like the key is slightly too low for him to sing in.). The flip side is taken at a breath-taking tempo, with both singers sound much more comfortable with the song. The band cook up a storm throughout this side. (MC)
Label Shots courtesy of PJ Tricker
Email me! 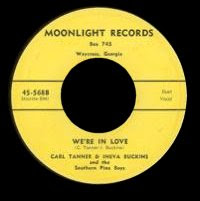 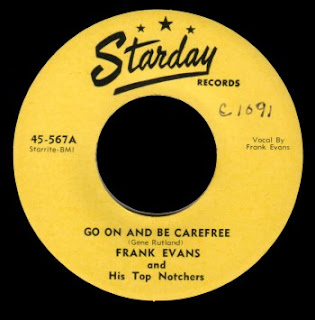 STARDAY RECORDS 567
(Artist from Tampa FL at time of release.)
FRANK EVANS and his Top Notchers
Jun 56 (BMI clearance on 20th Jul 56)
45-567-A - Go On And Be Carefree
(Gene Rutland) (Starrite BMI)
45-567-B - What Is It (That I'm Too Young To Know)
(Gene Rutland) (Starrite BMI)
By the time Frank came around to recording another disc for Starday (albeit on the custom series), he had organised his own backing band - the Top Notchers. The band were Arnold Newman (ld gtr), Roland Newman (fdl), Pip Studenberg (bs) and Colin Thomas (Stl gtr - who doesn't appear on this disc). The drummers name is long forgotten. This was recorded at WHBO in Tampa FL.
The A side is a pleasant enough hillbilly disc, but it's the flip side that catches your attention. Taken at a fast clip, this has an almost "bluegrass" feel to it. Pretty cool stuff for a bunch of youngsters!
More from Frank later on in the series. (MC/Al Turner / PJ Tricker / Andrew Brown (Interview for Hillbilly Researcher No. 24) 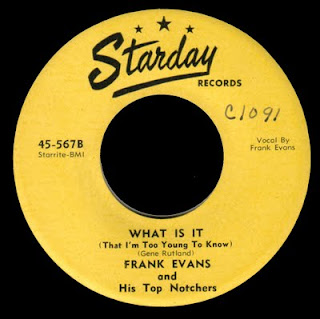 Posted by Malcolm Chapman at 09:05 No comments: