LUKE GORDON Acc by C Smith and the Tennessee Haymakers.
Apr 56 (BMI clearance on 18th May 56)
45-555-A - Let This Kiss Bid You Goodbye
(Gordon) (Starrite BMI)
45-555-B - Baby's Gone
(Gordon) (Starrite BMI)
STARDAY RECORDS 555
(Artist based possibly in Quincy, KY at time of release.)
Gordon “Luke” Brown was born in Quincy, KY on 15th Apr 1932 and was one of 8 children. Luke started broadcasting over WPAY in Portsmouth, OH with a band called the Rhythm Rascals, thanks to his friendship with Zeke Mullins who was a DJ on the station. After a stint in the army during the Korean war, he returned to the US and continued his music career. he ended up at the Old Dominion Barn Dance from Richmond, VA before heading off to Tennessee for a stint with Ray price and the Western Cherokees.

There he moved on to Washington DC where, working with fiddler Curley Smith, he recorded for Ben Adelman, which resulted in L&C 550 / STARDAY 550 (The “C” stands for Cuca, his first wife, whilst L is for Luke). About this time, he started up his own Quincy Record label whilst settling in Quincy, KY.

The A side is more in the sad Hank Williams vein. Flipside is a superior country rocker with some fantastic lead guitar bubbling behind his vocals. (I wish I knew who the lead guitar player was). Luke’s got one of those voices I could listen to for hours; a cross between Hank Williams and Luke McDaniels. Luke died on the 14th of September 2010 (MC)

Whether this also appeared on the L&C label is undetermined at present. 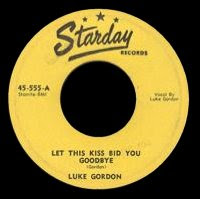 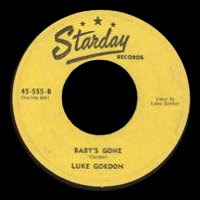 Posted by Malcolm Chapman at 03:39 No comments: