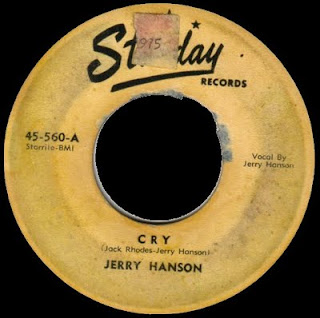 JERRY HANSON
May 56 (BMI clearance 15 Jun 56)
45-560-A - Cry
(Jack Rhodes / Jerry Hanson) (Starrite BMI)
45-560-B - I'm Doing All Right
(Jack Rhodes / Jerry Hanson) (Starrite BMI)
Unlike most of the artists who had a Starday Custom disc, I have a bushel of info on Jerry, mainly due to the excellent sleeve notes by Wayne Russell written for the Ace CD "Starday / Dixie Rockabilly Vol1" (Ace CDCHD 704). In 1954, he was appearing on the "Western Star Serenade" Hillbilly show out of Tyler, TX and somehow ended up at Jack Rhodes cozy little hotel out of Mineola, TX, where he probably cut these sides. Sometime later (or even perhaps earlier), Jerry cut a faster take which languished on the shelves until it was issued on "Gene Vincent Cut Our Songs" (ACE CDCHD 1018). (By the way, both CD's mentioned here are "Must Have In My Collection" musical quality about them!)
"Cry" is a nice song, more country than anything else and Jerry and Jack Rhodes were hoping to pitch it to a good and known country singer through Capitol Records. "I'm Doing All Right", on the other hand is a tight, moody rockabilly classic with a threadbare feel, fronted by Hanson's assured vocals. (I prefer this to the faster unissued cut which seems to lack the passion of the 45.) Although I can hear quite a few artists covering "Cry", Jerry OWNS the B side and I can't quite imagine anyone else covering the song as well as Hanson does.
Hanson later appears on Ed Manney's Bluebonnet & Manco labels (Both are good vocally, especially the Bluebonnet 45) and on Colpix (which I haven't heard yet.). And then ..... he disappears into thin air as far as I'm concerned. (MC / PJ Tricker / Al Turner / Neil Scott / Wayne Russell / Rob Finnis)

Email me!
Label Shots courtesy of Neil Scott (who almost blew a blood vessel when he finally secured a copy.) 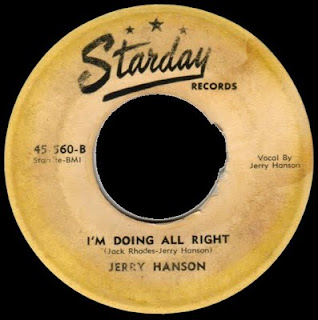 Posted by Malcolm Chapman at 18:00 No comments: