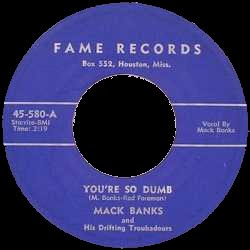 FAME RECORDS
Box 552, Houston, MS
MACK BANKS and his Drifting Troubadors
Aug 56 (BMI clearance on 21st Nov 56)
45-580-A - You're So Dumb
(M Banks - R Forman) (Starrite BMI)
45-580-B - Be Boppin' Daddy
(M Banks - H Brown) (Starrite BMI)
I could prattle on about this record, but instead I'll let Mack tell you himself ....
"I wrote "You're So Dumb" in 1954 and Houston, MS, USA radio station (WCPC) recorded it with one microphone, Hook Brown (lead guitar), Luther Foreman (standup bass), Charles Rome (fiddle) and me singing and playing rhythm guitar. It was number 1 at WCPC 19 weeks in a row. Dropped to 2 or 3 for a few weeks and back up to number 1 for a total of 26 weeks at number one. It was the number one song of the year in 1956. "Be Boppin' Daddy" was 4 to 6 months behind "You're So Dumb" with Hook Brown (Lead guitar), Luther Foreman (stand up bass), and Tommy Coffee (drums) and me (vocals and rhythm guitar). It was number 1 for 7 weeks. The radio station sent these tapes to Don Pierce at Starday records and released it on Fame Records which I and the radio station owned but never registered the Fame name. My friend Rick Hall of Mussel Shoals, AL picked it up and registered the name about a year later. Collectors Records (White Label Records) of Rotterdam, Holland released 6 songs (including those 2) in the early 70's. I have re-released these songs on cd cut from that same recording on MEB 0019. To my knowledge only 350 of the Fame 580 were pressed."
Both sides are killer rock-a-billy in the highest degree! In fact, the intro to "You're So Dumb" is goose-pimple inducing madness! What a darn fine record! Only 350 pressed! Of course Rick Hall wasn't the only guy to use the FAME Record label - Jimmy Heap's Texan label springs to mind off the top of my head. But then again, nothing matters once you slap this disc onto your turntable.
Email me!
Label Shot A side courtesy of Terry Gordon
Label Shot B side courtesy of PJ Tricker 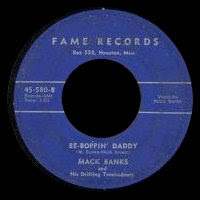 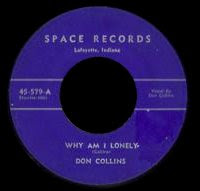 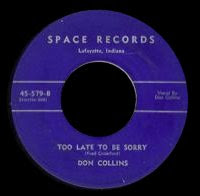 Posted by Malcolm Chapman at 13:45 No comments: 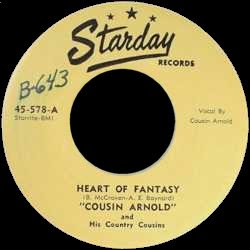 Second (and at this point in time) final offering from Cousin Arnold, or Arnold Eugene Baynard as he was called.. A side is a pleasant enough hillbilly disc, whilst the flip is again bordering on Rock-A-Billy, although this was possibly unintentional. With "Cat Music" hogging more and more of the radio airwaves, these country artists were forced to at least try to be sounding like they were keeping up with the times. Baynard was based around South Carolina for most of his life, yet born in Avondale, NC on June 8th 1930. Arnold died on 31st May 2005.(MC)
Email me! 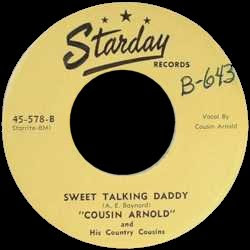 LUKE GORDON and his Lonesome Drifters

Not seen or heard this disc as yet. Luke's story can be found under his previous Starday Custom Releases. Still waiting for the Luke story from Dick Grant to materialise. Will I live long enough? 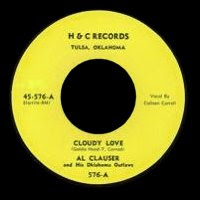 H&C RECORDS 576
Tulsa, OK
AL CLAUSER and his Oklahoma Outlaws
Jul 56 (BMI clearance on 28th Sept 56)
45-576-A - Cloudy Love
(Goldie Hood / T Conrad) (Starrite BMI)
45-576-B - Who's Fooling Who
(Goldie Hood) (Starrite BMI)
Alas, although I have label shots, I have yet to hear either side of the disc. But at least I have some info, courtesy of the excellent and informative sleeve notes on the Bear Family Nashville Hillbilly Box Set. Clauser was first heard of playing with bands in Preoria, IL in the mid twenties and first recorded for ARC Records. He was based most of the time (at this point) around Cincinnati, OH and played on WCKY before relocating to Tulsa, OK, with a stint in Fort Worth, TX. After recording for Bullet Records, he also had releases on Arrow and Skyline from Tulsa. (Anybody got any details on these?). He also launched the recording career of Patti Page.
Backed by his Oklahoma Outlaws, he self released this fine Western Swing / Hillbilly disc on his own H&C label for local promotional purposes. What happened to him after this disc is a mystery to me. 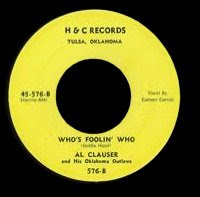 Posted by Malcolm Chapman at 00:45 No comments: 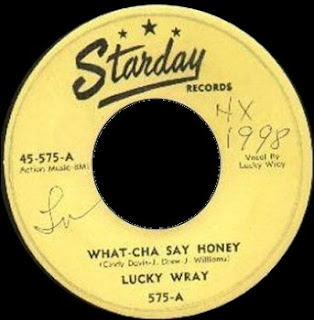 STARDAY RECORDS 575
Washington, DC area
LUCKY WRAY
45-575-A - What-Cha Say Honey
(C Davis / J Drew / J Williams) (Action Music BMI)
45-575-B - Got Another Baby
(L Wray / Cindy Davis) (Starrite BMI)
Another great hillbilly offering (on the A side) and a chugging, almost threatening rocker on the B side. The B side is certainly a musical highlight in anybody's life. This is the second of 3 45's they had issued on Starday, leaving the best one 'til last (Starday 608). 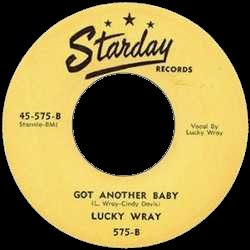 Posted by Malcolm Chapman at 00:40 No comments: 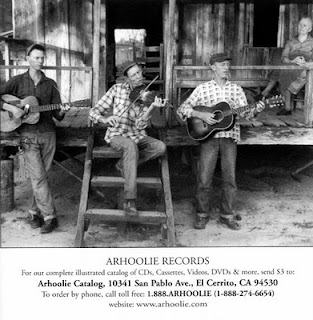 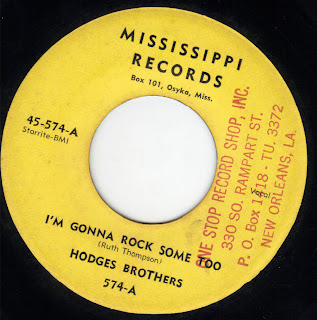 MISSISSIPPI RECORDS 574
Box 101, Osyka, MS
HODGES BROTHERS
Jul 56 (BMI clearance on 28th Sept 56)
45-574-A - I'm Gonna Rock Some Too
(Ruth Thompson) (Starrite BMI)
45-574-B - Because I Loved You So
(Ruth Thompson) (Starrite BMI)
The Hodges Brothers were one of many old time bluegrass / hillbilly bands that lived in a musical time warp deep in the US south. Rediscovered by Chris Strachwitz of the famed Arhoolie Record Co in 1960, their music still harked back to the twenties and thirties before the great depression.
Originally recording for Lillian mcMurray's Trumpet label, rockabilly fans will be more aware of their gut-kicking monster "Honey Talk" on Whispering Pines 201 from Indianapolis, IN .. But recently, this disc appeared out of nowhere and it knocks that disc into the bleachers. A solid arse kicking country bopper with great guitar work and lovely back-in-the-woods vocals.
All three brothers were born and raised in a small rural settlement called Bogue Chitto, MS. Felix (1923-1979) was the fiddler in the brothers band. Ralph (1927-1976) was the guitar / mandolin player and did most of the singing. James (1932-) was the rhythm player. He was still alive in 2003.
Arhoolie brought out an LP of material they recorded for Chris and in 2003 they reissued it as a CD with extra tracks, including a never and stonkin' recut of "I'm Gonna Rock Some Too". Oh, Lord - I think I've died and gone to Heaven! I have included a photo of the Brothers taken from the CD with Arhoolie's address at the bottom in case you good people want to purchase this fine CD. Alas, the Mississippi disc is not included on the CD plus there's no story on how they came to record this disc or who financed it. But I'm off to Arhoolie Records in April so if Chris is there, perhaps I can update this page when I get back. 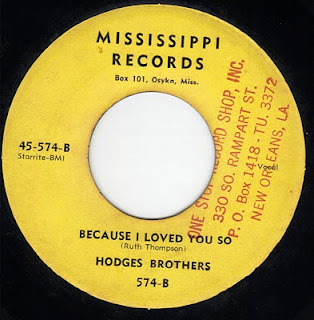 Posted by Malcolm Chapman at 00:34 No comments: 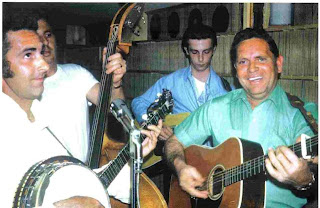 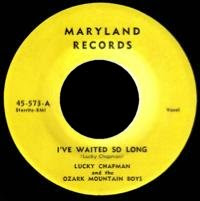 Lucky Chapman came from Frederick, Maryland - moved to Florida in the 1960's - died around the late 60's. Other info: The band re-cut the side 'Bluegrass' on the Fonotone label, which Joe Bussard owned - it was cut down in Joe's basement on July 26, 1959 - the flip side being the Bill
Monroe classic 'Put My Little Shoes Away' (Fonotone 617) Lucky Chapman - guitar; *Bill Berry -
mandolin; John Duffey - mandolin. The band were working out of WFTR, Royal, VA in 1951, where Frank Esworthy was the bass player. The band cosisted of Lucky, Frank (???) & Bill Poffinberger at this time.
B-573 is an instrumental featuring John Duffy on mandolin. The B side was reissued on STARDAY EP-258.
The Maryland issue was cut down in Lucky Chapman's basement - when they received, and listened to the record, they were not happy with the sound - Joe says that Lucky Chapman said that they wished they had cut the sides at Joe's.
*Paul Chaney, *Bill Berry: They were Bill & Paul The Bluegrass Travelers - who cut an EP on Dixie 981 (Doin' My Time, Bluegrass Hop, Change Of Heart, Cumberland Valley Special)
Bill Berry was killed over at Brunswick, when coming out of an exit his car was hit by another.
They also cut a record on their own Traveler label: 'Banjo Stretch'/'Cherished Memories' (Traveler 500), cut at Joe Bussard's Studio. 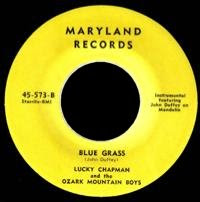 Posted by Malcolm Chapman at 00:19 No comments: