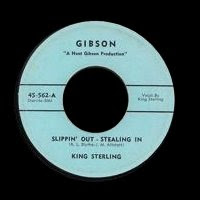 (No Location)
KING STERLING
May 56 (Billboard review on 9th Jun 56. BMI Clearance on 15th Jun 56)
45-HD-562-A - Slippin' Out - Stealing In
(R L Blythe / J M Alstatt) (Starrite BMI)
45-HD-562-B - Alone, Lonesome And Blue
(R L Blythe / J M Alstatt) (Starrite BMI)
Apparently, this artist became Sterling Blythe who recorded for Sage & Sand (can anybody confirm this?) A quick trawl through Billboard magazines found a few titbits on this artist. He was signed up to the KWKH Artist Services Bureau, run by Horace Logan, (booking mgr of the Louisiana Hayride), and around Feb 57 he was listed as one of the Hayride's personnel. By March 57 he was also appearing over KRBB (El Dorado, AR) on the King's Corrall Show. By then, he'd managed to get on the Starday main series with "What Will The Answer Be" / "Not Much" (#298) which was reviewed by Billboard on the 3rd of June that year. (They described the A side as a ..."highly effective weeper."
That description pretty much described the A side of this disc as well. Sterling's got a nice voice for these kind of songs, a little like Werly Fairburn in places. Flipside is a mid-tempo hillbilly number with nice steel and lead guitar with fiddle filling up the spaces behind the vocals. (I especially like the slight miss-fingering by the guitarist on the solo - makes my many mistakes with the Bandidos seem slightly less significant. Doesn't stop the guys yelling abuse at me when I make them though :-) (MC / Neil Scott)
Label Shots courtesy of PJ Tricker.
Email me! 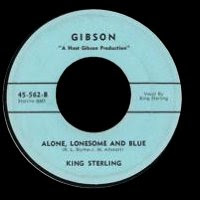 Posted by Malcolm Chapman at 18:47